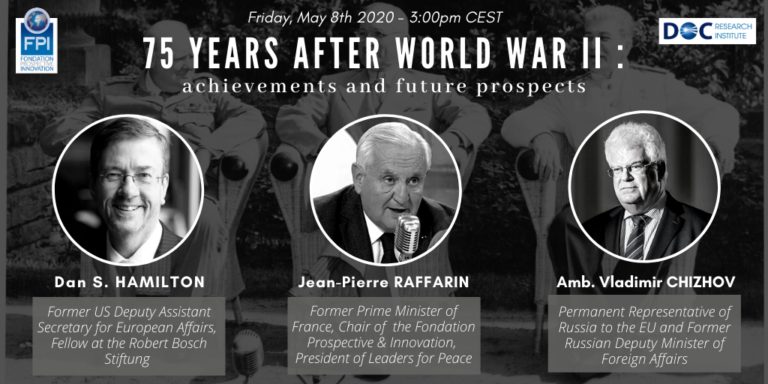 Dr. Vladimir YAKUNIN, Co-founder & Supervisory Board Chairman of the dialogue of Civilizations Research Institute and Head of the Department of State Governance of the Faculty of Political Science, MSU

In the midst of the Covid-19 crisis, on 8 May the world will commemorate the 75th anniversary of the end of World War Two and celebrate the achievements of the international system birthed by that historical moment.

The magnitude of the present Covid-19 crisis is often compared with the shocks of the 20th-century world wars.

The post-war response of world leaders 75 years ago was to strengthen international cooperation by establishing the UN-based multilateral framework to guarantee peaceful cooperation and development.

However, it seems today’s global leaders no longer share this vision and the risk of a geopolitical crisis is looming behind the Covid-19-induced economic crisis.

As the world enters this new age of uncertainty, the DOC in partnership with La Fondation Prospective & Innovation, will host a webinar entitled ‘75 years after World War Two: The world at a crossroads again’ on 8 May at 3pm CEST.

Questions to be discussed during the webinar:

Will the Covid-19 crisis lead to a reset in international relations and an acceleration in the recomposition of the World order inherited from the WW2?

Is the ‘battle of the giants’ between the US and China inevitable? What role for Europe and Russia?

Does the UN, created 75 years ago, still have a role to play? If radical reform is necessary, what should it look like? Has the globalisation bubble finally burst and will we see the emergence of new kinds of capitalism, new kinds of regionalism? Shall we see a resurgence of the primacy of nation-states?